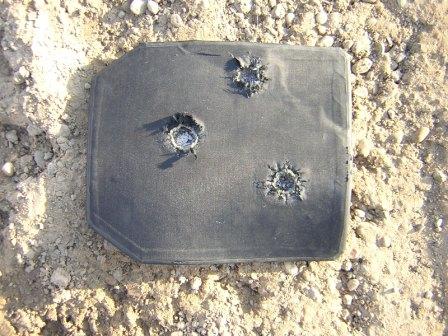 Insert plates are designed to work in conjunction with a the soft armour plates. (SAP). The bullet is decelerated, fragmented and deformed by the insert plate and any fragments are captured in the soft armour behind the plate.

BALLISTIC PLATES FOR USE WITH SOFT BODY ARMOUR

There are two types of ballistic plates in general use today; ‘Stand-Alone’ and ‘Insert’.

Stand-Alone Plates
Made from ceramic or polyethylene are designed to capture bullets fired from high-powered handguns and rifles where the bullet velocity exceeds 500 m/s. Stand-alone plates are made to contain the bullet in the plate without the need for a soft armour vest behind them to capture any fragments. However, from a practical point of view, without the protection of a vest behind the plate, the wearer would be exposed to serious trauma, since there would be nothing to cushion the wearer from the massive energy dump from high-powered, large calibre ammunition.

For this reason we do not recommend the use of Stand Alone Plates.

Insert Plates
Are designed to work in conjunction with a suitable soft armour ballistic vest (HG2 or NIJ 111A), where the bullet, when fired from a rifle, has a velocity in excess of 500 m/s, and/or the bullet construction has a hard-core material. The bullet is decelerated, fragmented and deformed by the insert plate and any fragments are captured in the soft armour vest behind the plate.

Insert plates are usually made from one of two materials – ceramic or polyethylene.

Ceramic plates are made from compressed and fired alumina ceramic powders which are formed into a monolithic tile, which, after firing, is processed by adding a composite backing of GRP or aramid composite to give structural strength and a multi-hit capability. By forming them into plates of varying thickness, they can provide protection against different threat levels from high-powered handguns to high-powered rifles, firing armour-piercing ammunition to 7.62 x 63 mm calibre and offer a multi strike capability.

Polyethylene plates will provide protection to NIJ level III and are, in general, only capable of giving protection against rifle fire with ball ammunition (standard soft core ammunition) such as 5.56 x 45 mm and 7.62 x 51 mm calibre weapons, using ball ammunition only. The level of protection they give against AK 47 7.62 x 39 mm ammunition is not always predictable. AK47 ammunition is manufactured by a wide variety of armourers using variable hardness of bullet head and core construction.

Threat Assessment
It is very important to carry out a comprehensive threat assessment, before specifying the threat level for ballistic plates. The assessment must take into consideration the following factors:

Type and style of weapons which may be encountered.
Type, style and velocity of ammunition.
Country of origin and manufacturer of ammunition, if known.
Weight of plates.
Long or short term wear.
The most common weapon used by counter-insurgents is the AK47 assault rifle and it’s derivatives. AK47’s use 7.62 x 39 mm ammunition of variable quality and consistency. AK47 ammunition may also be armour piercing.

If the threat is from an AK47 type weapon, then the threat should treated as NIJ level 4.

Registration is free and easy!

Create an account
Product added!
The product is already in the wishlist!

The product has been added to your cart.